Today the plan was to keep going north again so that we are closer to the ferry when the time comes to cross. We decided that we want to take scenic routes on roads that would also be fun to ride. We picked the roads as best as we could from how they looked on the maps and how high they go. The decision was made to head for Ketama and then find a place there to sleep. We were told the coastal routes are nice and this would put us in a good spot to take a coastal route towards Tangier Med. We also wanted to go past Fez to see what all the fuss was about so we picked a road that would skirt past so we can take a peek.

There was some 3 day long religious celebration going on and this meant that most shops and places were closed in the day and it would make it a bit more difficult getting food or anything we need. On the flip side it meant that there was very little traffic which made most of the roads a real pleasure to ride.

The weather was great, but up in the little mountain roads it was very nippy when you're just in your summer gear. I put the heated grips on, but even that doesn't keep the cold away. We took an alternative route on a whim and were riding through some high hills with lots of trees around. It was great, the air was as clean as it gets and because we were going at a fairly relaxed pace we could have a bit of a look around. As it goes, when you get cold you have to stop to take a leak every now and then.

And since we're stopping we might as well make a cuppa (and if you're as lazy as I am you just get Locky to do it.) 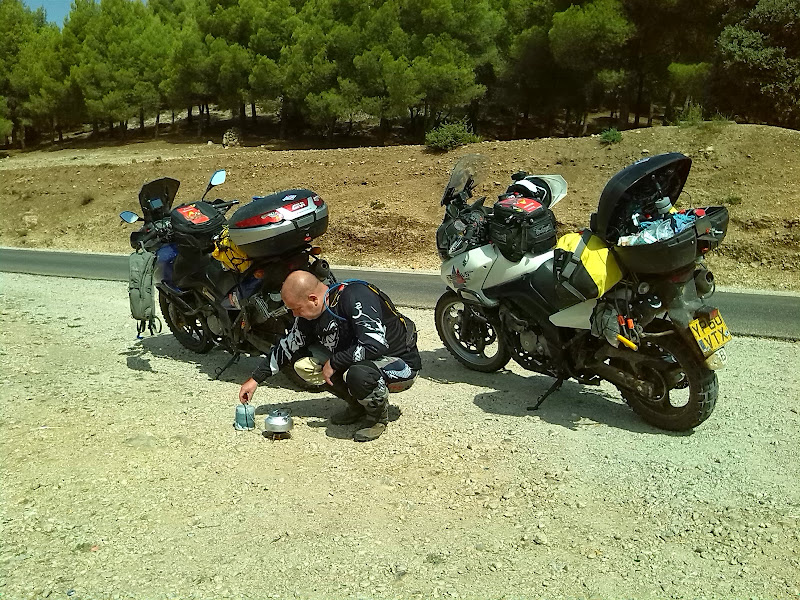 Them broken off mirrors are great for holding open an adventurer's top box lid when you get the coffee and biscuits out... 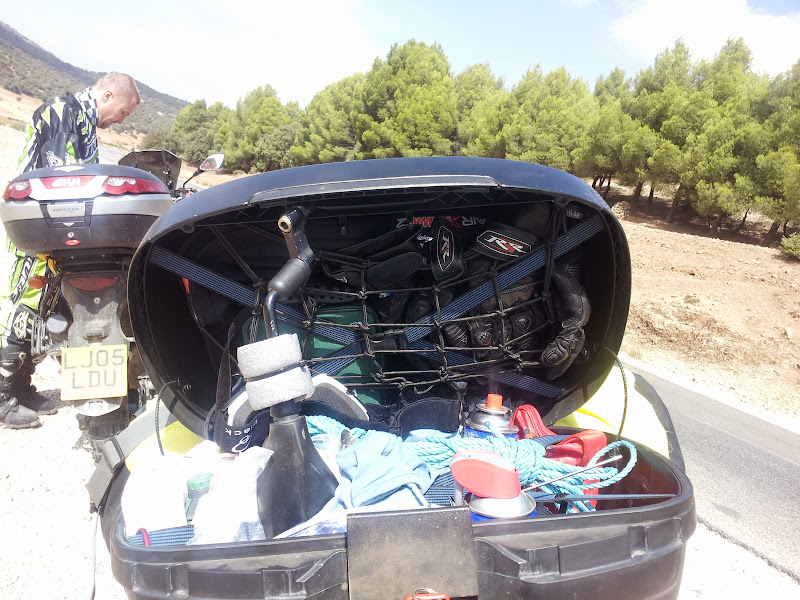 It was on this road that I noticed that my steering head bearings were loose. We didn't have a tool big enough to fix it so I had to live with it, at least it wasn't getting worse, but ever time I brake I could feel it rocking.

Not long after this we were skirting round the outside of Fez. What a disappointment, it's a dirty city, at least where we were. People were preparing goat's head (as part of the religious celebration) on the sidewalks with the fire directly on the pavement and using whatever metal bits they could get to keep it out of the ashes. It was a rough neighbourhood and people looked at us with the eyes of the malicious poor: to see what we had that they could take if they could get to it. We followed the lead of the rest of the sparse traffic and didn't stop at red lights or crossings, we only slowed down and crossed as quickly as you can safely. I was familiar with this, but I've not experienced it for a long time as I tend to avoid places like this in South Africa. I was leading with the satnav and made a the call not to stop in Fez at all, Locky would agree later. I'm sure if I did stop he'd think me crazy, at least more so than he usually does. We didn't get any pictures and only felt safe when we were a fair few miles out of the city, though I still felt dirty for the next 50 miles after that before forgetting about it a bit.

We were now riding towards Ketama, this part of the country is very beautiful, but it was quite obvious that the roads here are more neglected than they've been so far. Things were also a little more dirty and we'd often see rubbish lying next to the road and burning. The smell from some of these was ghastly and the smoke choking if the wind carried it our way. The people were also not friendly any more, instead of kids waving and smiling they were now just staring as we passed by. I felt the people were restless and looked like they worried more than others we've come across. The relaxed atmosphere in most other towns was now one that was more tense. I realised why there weren't any hotels on our list in this area, this was the weed growing part of Morocco. This was the part the government turned a blind eye to and ignored, obvious by the state of the infrastructure here. I'd made a mistake taking us this way... The towns were often very dusty and dirty and people were shouting at us to stop while making gestures of smoking, everyone and his dog was trying to sell us weed. Oddly most people trying to do this were dressed a bit better and looked a little cleaner than the rest, it must be a lucrative business. We got to Ketama and it was a unanimous decision that we're not staying over here by just looking at each other. I suggested we keep going towards Chefchaouen, we know that area is much safer. We didn't want to stop anywhere, but short of pissing in my pants we had to. I found a place where you couldn't see we're parked up until you were onto us and while I took a leak Locky got some pics (of the scenery...) 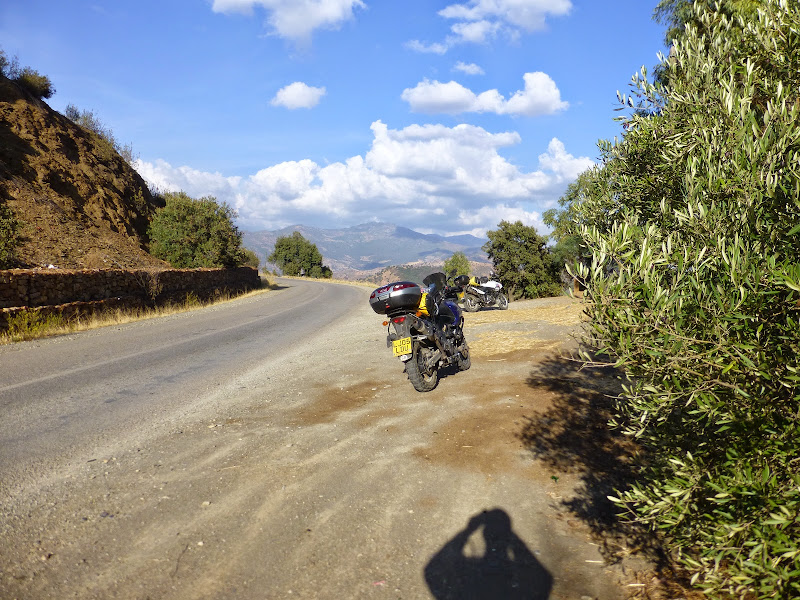 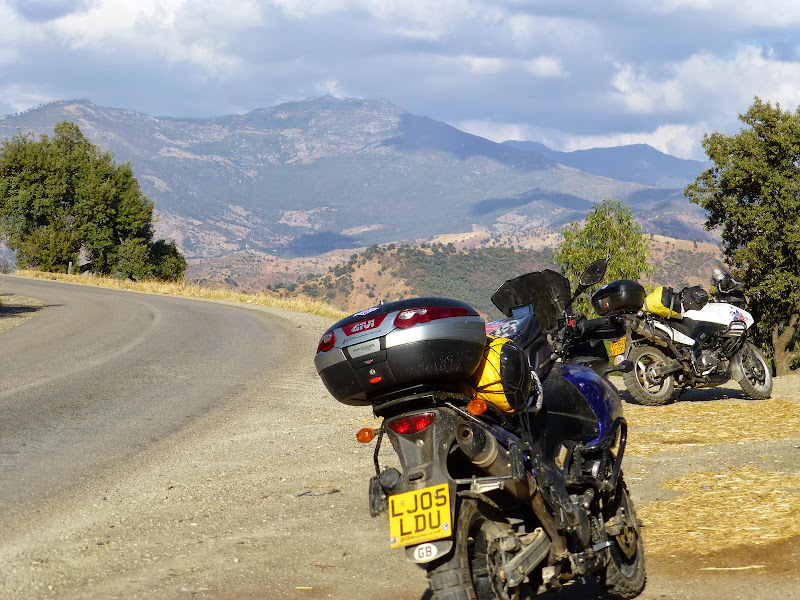 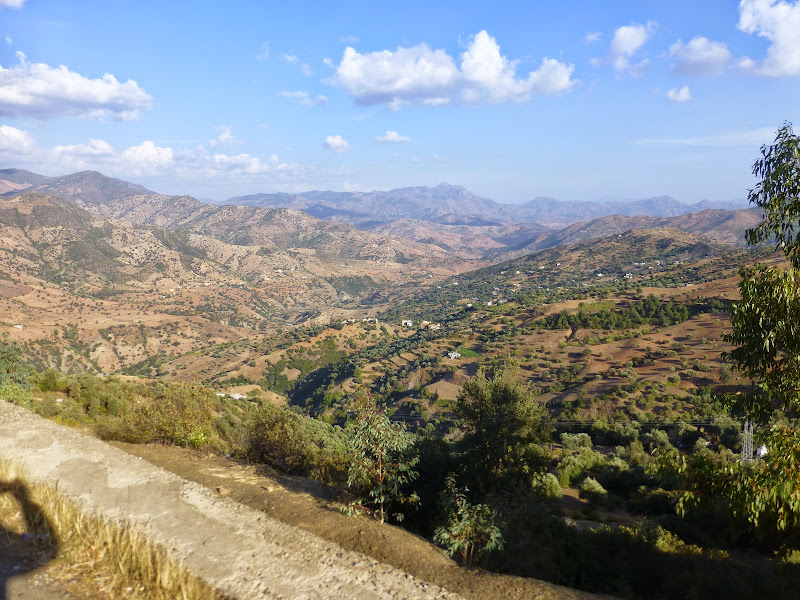 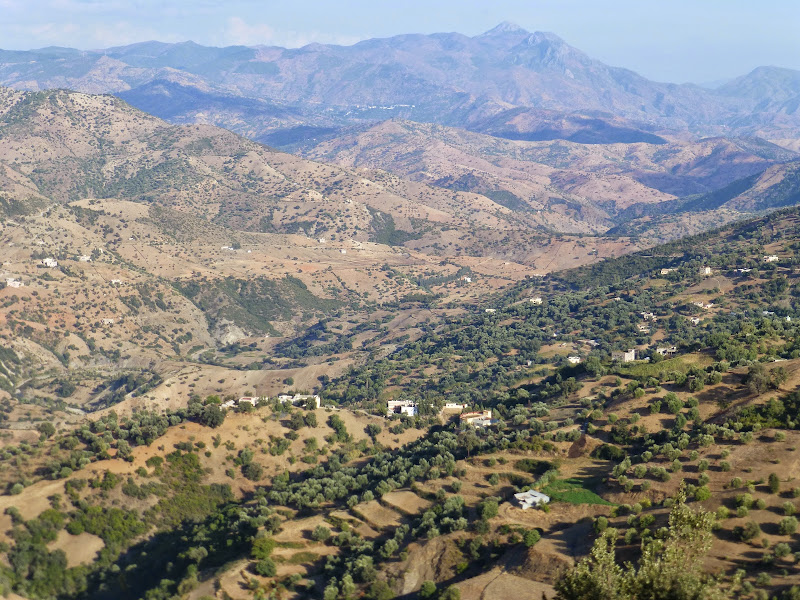 We set off from there and had an encounter of sorts. 4 men in an old Mercedes caught up with us and were honking and flashing lights showing for us to pull over while making smoking signs. When we didn't respond they dangerously overtook us down a mountain pass and then slowed down in front of us. I judged that they had no intention of hurting us, but I was fairly certain that if we did stop we'd not be getting any weed and we'd be relieved of some of our possessions at the very least. They didn't seem to want to give up telling us to stop. Ahead there was a pull over place coming up on the left, the driver put on his indicator and they showed for us to pull over. I nodded and gave them the thumbs up, slowed down a little and moved to the middle of the road so it looked like I was pulling over. They moved over and were slowing down to stop (these old Mercs are heavy), at this point we went around them wide and then put on some serious pace down the mountain pass. There was no way they were going to catch us, we were on bikes and were riding these type of roads all day long, we could shift like they've never seen. They didn't follow and we didn't stop to find out if they did. All this with my steering head bearings that were so loose the forks were rocking every corner I brake for (I had to use rear brake a bit to alleviate this, but I openly admit that I fear rear brake on road so I was gentle with it.)

It was getting cold now and the light was getting lower, we were still heading toward Chefchaouen and further away from Ketama. The occasional person would show for us to stop for weed, but they were a lot less frequent and a lot less aggressive now. I'd been holding a piss for very long and we made another stop. Some men in a car stopped where we were and said we should come with them "for eat and drink", we politely declined several times while I put my gear back on and then we quickly set off again. They were going the other way and were a lot less malicious in their manner, but then thieves are often friendly.

We kept going, hoping to find a place to sleep in an area that looked nice enough, but our luck was out. Eventually we made a quick stop so I could change my goggles lens from the orange one to a clear one as I could hardly see with it getting dark. We slaved on and arrived after dark, quite late, in Chefchaouen, booked in at a hotel that was right in front of the one we stayed at the previous time. The room was nice and clean and we were glad we slogged it here for the night. Our bikes were locked up where they were the previous time and we ate at the same hotel we stayed at the previous time. 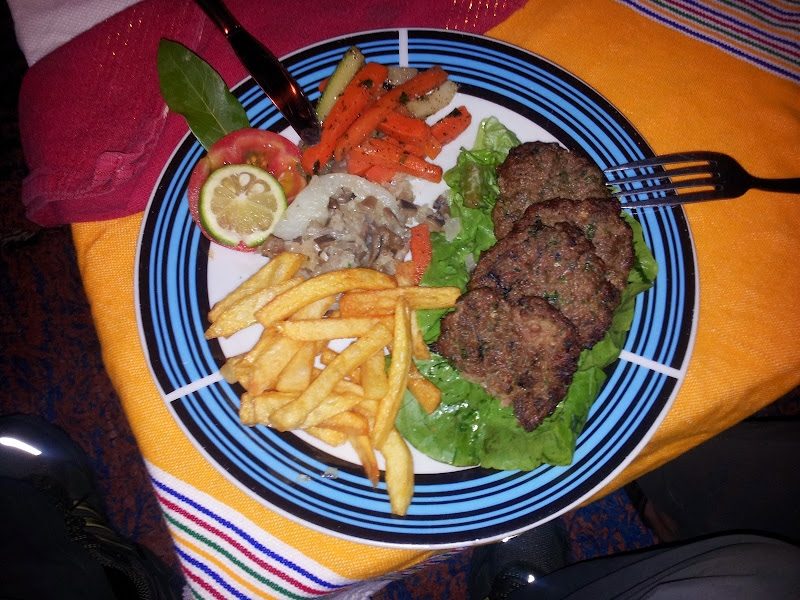 The previous time we ate here the goat tagine was great, but this time they didn't have goat, only beef, so I went for that. It was good, but not near as good as the goat tagine was. I don't know why people don't eat goat meat more often, it's full of flavour. 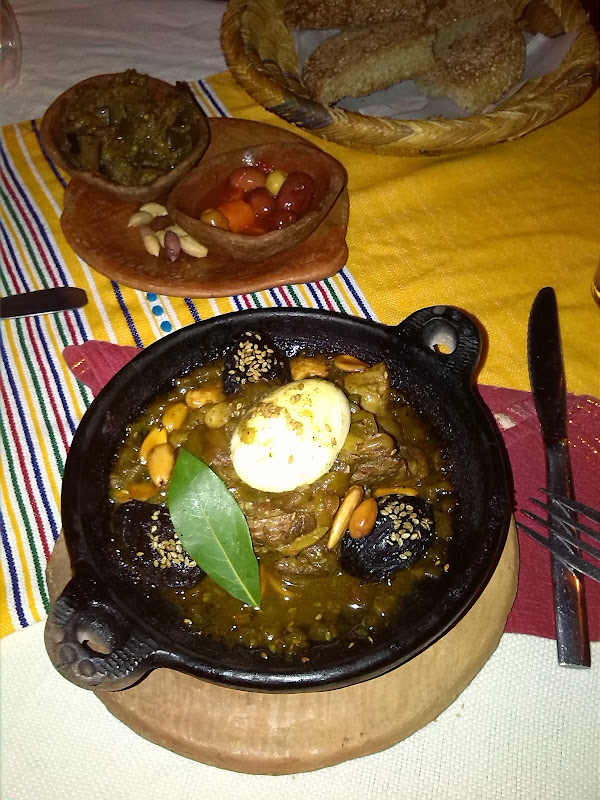 It has to be said, even with all the drama today the roads we were on were some of the best we've ever ridden anywhere in the world. The scenery was great as long as you're not near a shitty town to spoil it and you've never seen so many twists over a mountain pass as we'd seen this day. It was so twisty and demanding that it took serious concentration to ride them, especially when riding in the front when you haven't got the brake light of someone ahead to warn you of an particularly tight corner. If it wasn't for the people and the neglect, this would be the best part of Morocco, hands down. I'd even go as far as saying I'd want to ride there again if I could, just with more than 2 people next time so you have some 'protection' and look less vulnerable so people can leave you alone (and I'd want to do it on an unloaded Supermoto!)

Saturday, 4 October 2014 We slept well and had a good breakfast before we set off for the day.…