We slept quite well despite the call to prayer going out early morning, it's loud and annoying when you want to sleep, sounds like a typical school PA system. We don't even understand what it is that they're whining about, but usually it only goes on for 5 minutes. This would be a regular disturbance to our sleep for the rest of the trip. There are of course other disturbances of my sleep as well, such as Locky's snoring, but earplugs work well enough for that.

Chefchaouen looked much different in the day. When we checked in to the hotel the previous night I asked that they give us a room with a good view of the town. The hotel was on a hill side, in fact, most of Chefshaouen is built on the hill sides. The window in our room overlooked the town somewhat and we could see many buildings that were painted blue, something you often hear people mention when they talk about Chefchaouen. 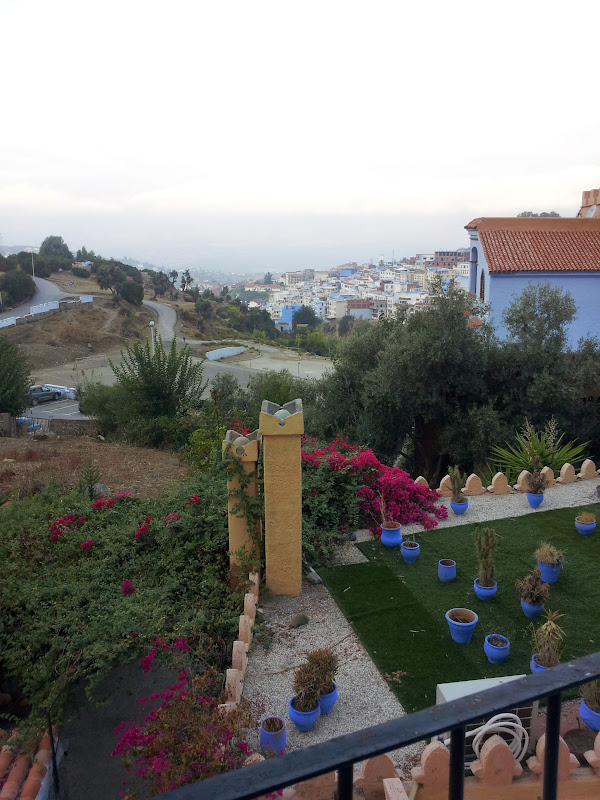 Another view from our room's window, to the right this time: 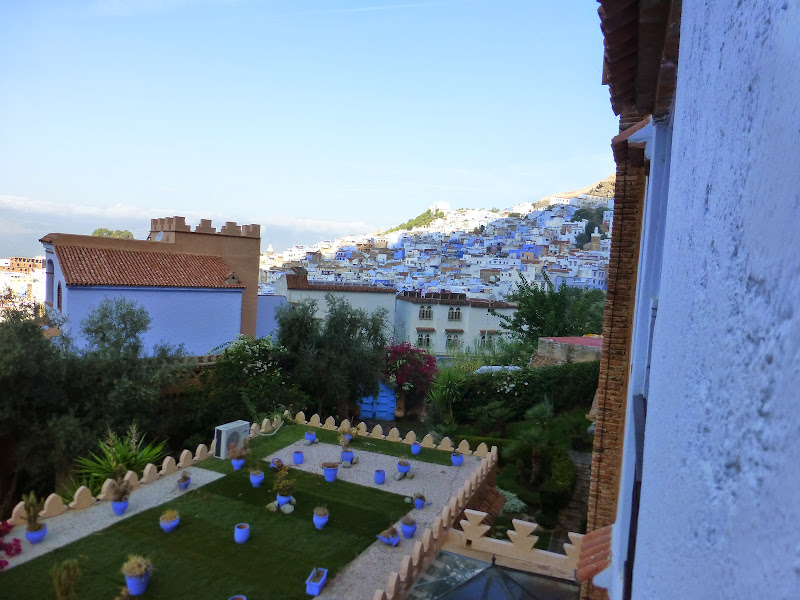 We had breakfast at the hotel, it consisted of various breads, some jams, goats milk cheese and olives. It was nice enough and the coffee was good too. The orange juice was great, proper freshly squeezed juice, you know it's not from a supermarket when you taste it. 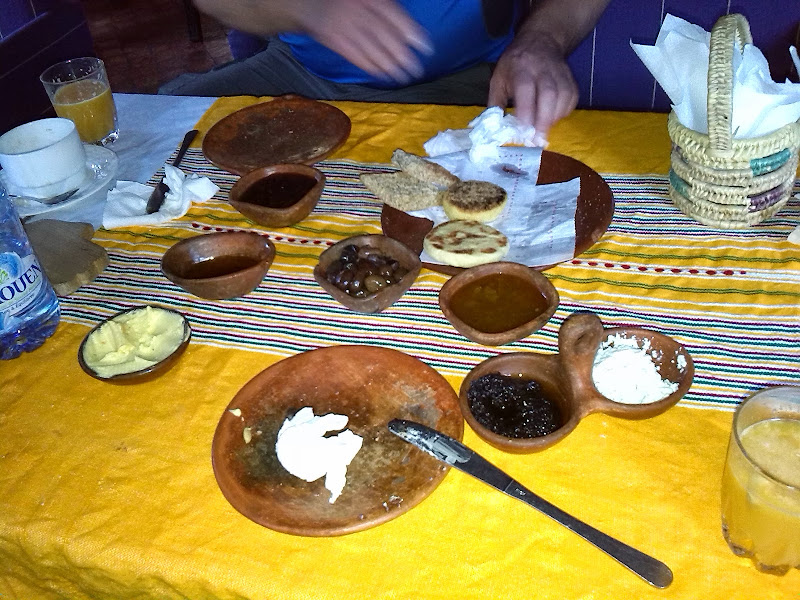 Our bikes were still safe when we got back to them, we loaded up and Locky took this picture while I went to get some change. 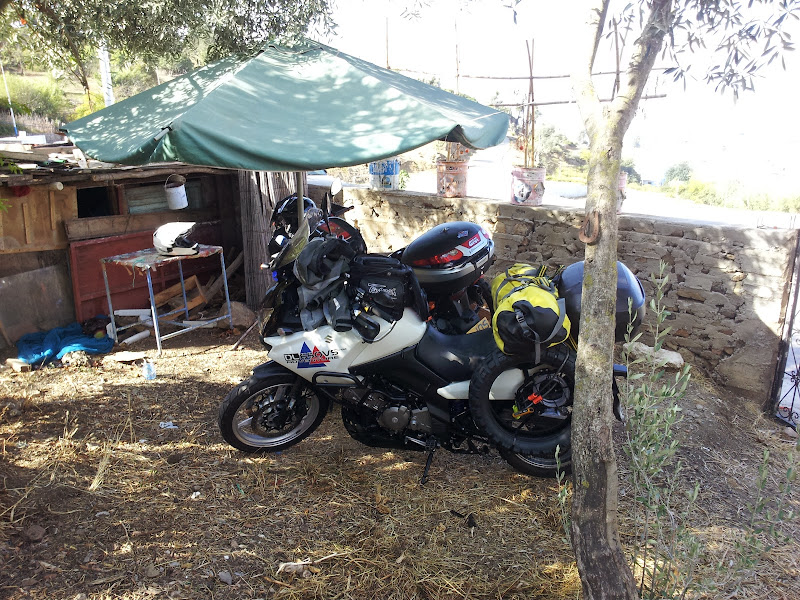 We tipped both the guards 20DH, they weren't too impressed, but my point of view was that they tried to sucker us into giving them a 100, trying their luck, instead of being honest and this was me making a point. 40DH is nothing for us, it's less than £4, you can't get 2 people to watch your vehicles all night for £4 in the UK!

Next we went into town, we needed to buy a SIM card for use in Morocco, Locky wanted to buy some tobacco and I needed to find an ATM to get some of them dirhams. So far I've either paid with my credit card (they seemed to have card machines at all the hotels we stayed) or Locky has paid. It took us much longer to buy a SIM card than we thought it would because we couldn't understand the shop keeper and he couldn't understand us. It's difficult explaining that you want data, text messages and calls on a PAYG SIM. Eventually, after asking many passers by if they could speak some English without any luck, the shop keeper told me to wait. He disappeared into the house next door and came out with a friendly young girl who seemed to be able to understand most of what I said, well probably about half of what I said in reality. She translated and we ended up with a SIM card and two bottles of cold water. All this took the best part of 30 minutes, normally buying tobacco a SIM card, two bottles of water and getting some cash can happen at the same kind of store within minutes back home. The language barrier was going to be an interesting challenge ahead, I was already kicking myself or not spending more time at learning French before we left. My original intention was to be able to speak it enough so that we could get by. In hindsight, we didn't really need a SIM, we didn't make any calls, we just sent some text messages and we'd be just as well off if we simply used our own phones.

We decided that we needed to get moving, we'd activate the SIM card later. We left the town centre and made a quick stop on the way out so I could put on my textile jacket. The weather was looking really good, we had smiles on our faces and were looking forward to the day's riding. 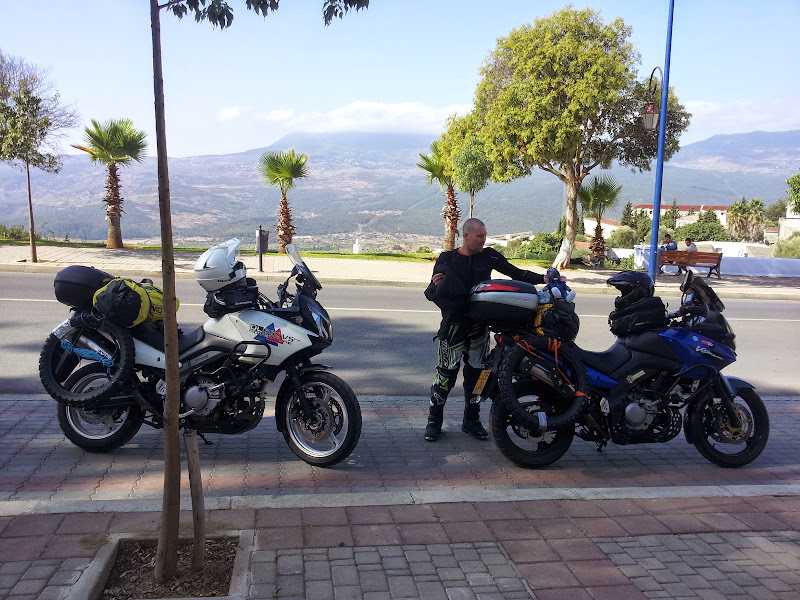 As planned we were going further south, this is where I had many routes plotted out on the satnav for us to pick from (the ones from the Morocco Overland book.) We were trying to get as far south as we could quickly so that we had plenty of time to ride around there. Even though it was a slog there were some nice roads and passing through villages and towns is interesting in that you see things that you're not used to at all.

In one town we were going through I spotted a bunch of bikes with UK and European plates. We'd been going for a while so I figured it's as good a time as any to stop. The blokes were from the UK and I think a few eastern European countries. They were having lunch, hoping that they'd picked a place where the food won't give them the trots. We asked where they'd been and where they're going (on their way to Erfoud), told them about the forums we go on and gave them some route, hotel and fuel details. We talked about their bikes and our bikes and other random stuff. It was nice meeting them and I hope they check in on one of the forums to tell us about their trip.

Some of their bikes: 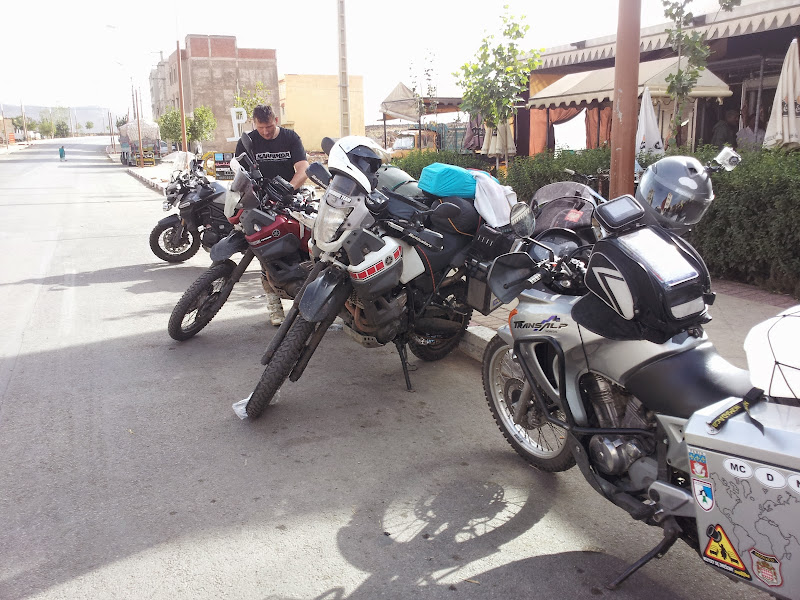 The bloke standing at that Ténéré is tall, apparently he jacked the rear of the Tén up to suit him and Téns are already tall, taller than a Wee with a Vee seat even.

After many hours riding we were decently far south, we ended up at a hotel in Midelt. The hotel was called Kasbah Asmaa and from the outside it looked stunningly good. 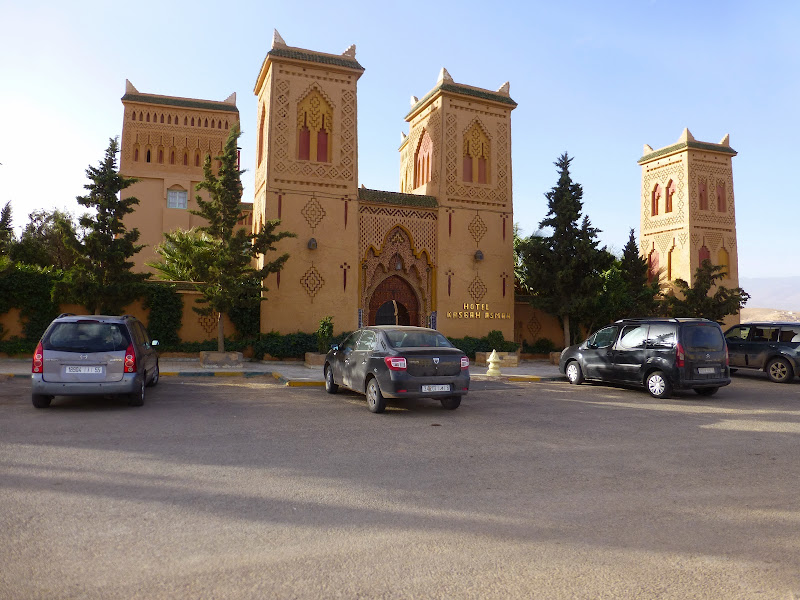 We rode through some great looking carved wooden doors... 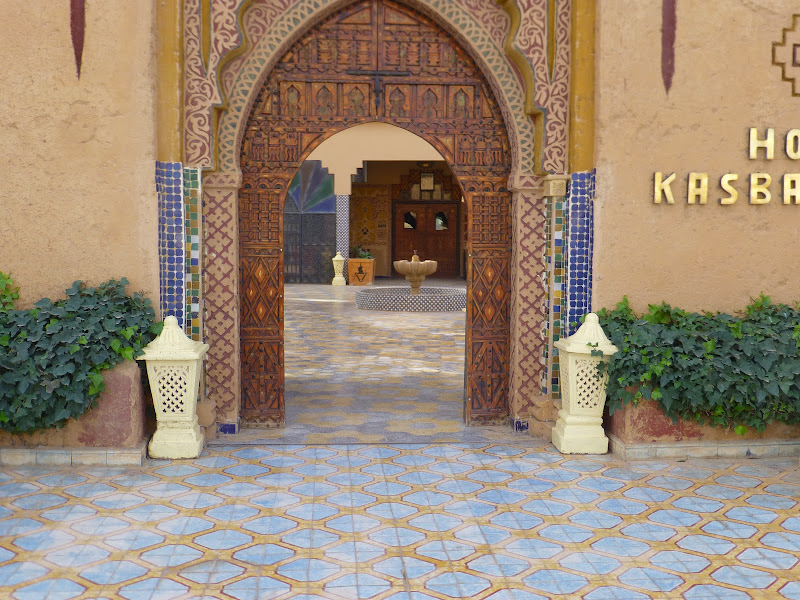 ...and parked in the attractive courtyard. 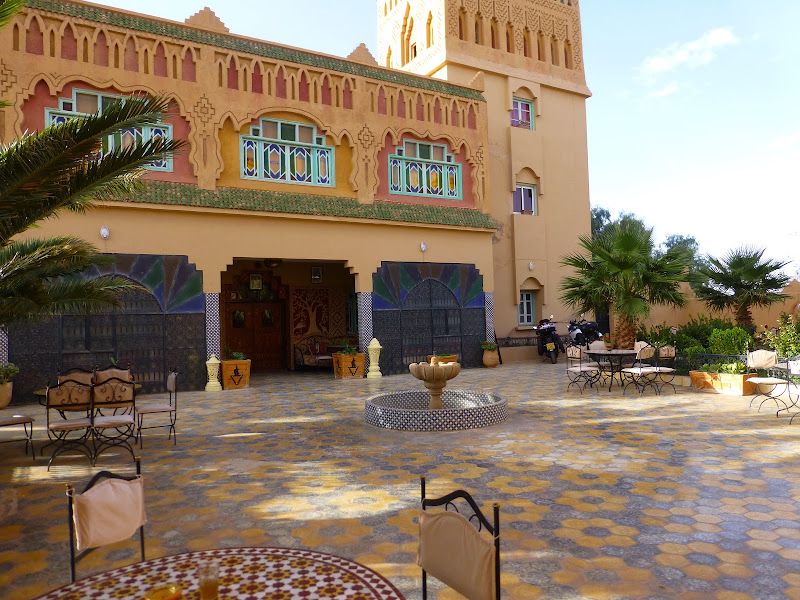 We took our stuff to the room, got cleaned up and found a place to sit outside, but under cover. Out came the map, the book and the tablet with more maps on it, we had to decide where we're going from here tomorrow. We found that they sold beer and had some, just what we needed after a long hot day's riding. It was getting dark fast and we had a power cut for a while, but we were prepared for it. 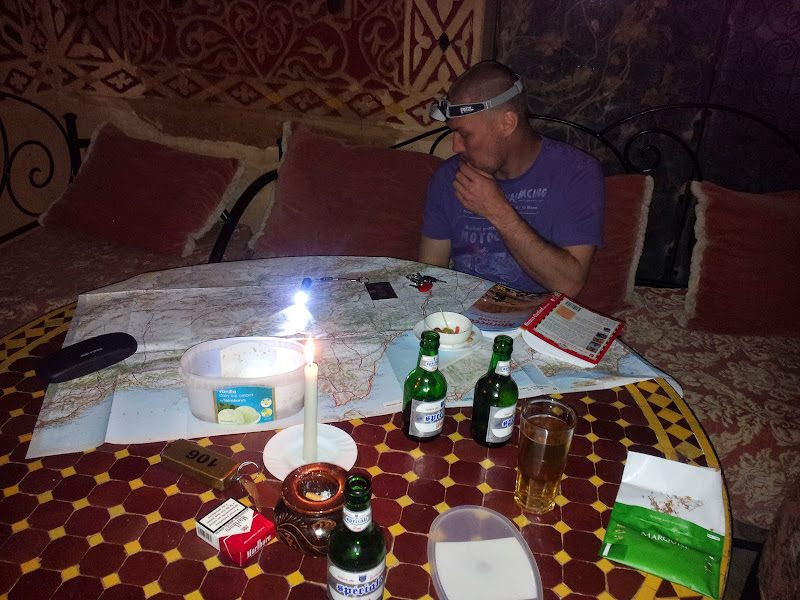 Once we figured out where we're going to we went inside to eat: 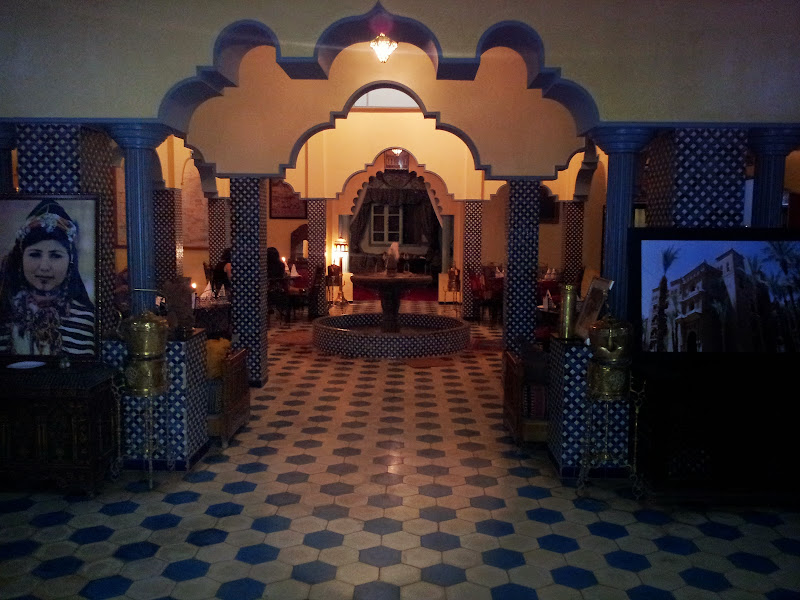 As nice as this hotel looks outside and in the foyer, the food was utterly disappointing and I'm sure it was the cause of my stomach problem a short while on. The room we were in was looking a bit neglected, much like the rest of the hotel on closer inspection. The place is in need of some maintenance, nothing serious, it just needs doing. One example of such maintenance would be to sort out the one ceiling down light in our room, it can't turn off. We even had the bloke from reception come up have a look to see if he knew where the switch was and checked behind all the curtains and where we thought they could hide a switch. In the end I simply duct taped it, I can't sleep with lights on. I also duct taped the window, there was a serious draft coming through there, enough to hear it. At least the beds were nice and firm, the shower ran strong and had hot water and everything looked clean enough.

Wednesday, 1 October 2014 Today it was time to get serious and put on some knobblies! Locky had seen…

Monday, 29 September 2014 The breakfast wasn't anything as good as the dinner we had the previous night, but…