Waking up and hearing the sea is always a pleasant thing for me, this morning was one like that. The weather looked great and the sleep had done me well, but I was stiff and really sore, particularly my shoulder and neck. 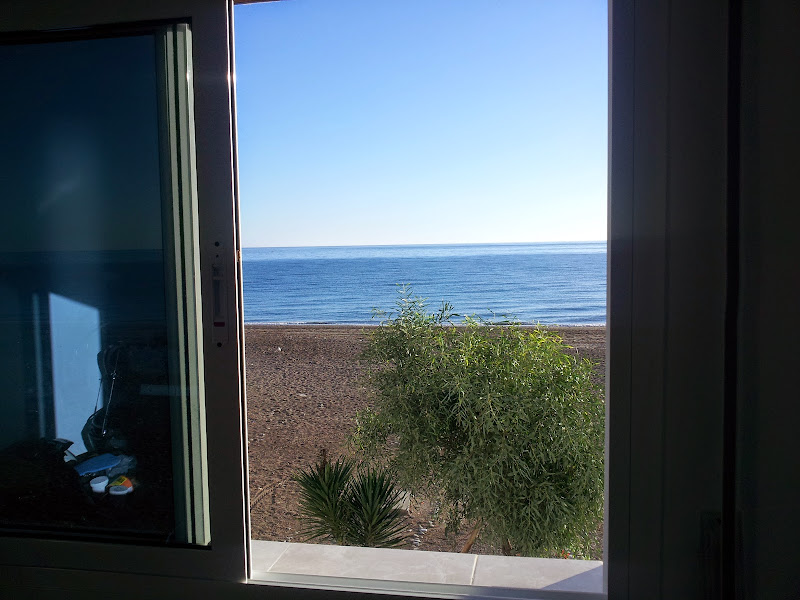 We packed up and Locky got the bikes out from the storage area they were in. In my state I was hurting too much to be of any real use, but once sat on the bike I was OK to ride without much problem. We had a rather quick and uneventful ride to the ferry port which wasn't far away from where we stayed for the night. After we bought ourselves some tickets we had to get X-rayed. This was quite weird, they made a lot of us stop on a slightly elevated concrete slab, leave the cars and bikes there and then gather in a shaded area to the side. Next to the slab was a truck that had a huge U-shaped arm-thingy mounted to it's side so that it could reach over all the vehicles on the slab. The truck had a x-ray machine installed in it and then drove up along the slab slowly scanning all the vehicles as it passed by them. I thought this was quite clever, they could scan a lot of vehicles in one go and it was over in minutes as opposed to possibly queuing for a much longer time. When they were done with the scan they sent us all back and we drove off to go queue for the ferry. Bikes get loaded last on ferries, but at least this means we get out first when you get to the other side. It was hot in the sun, but I think we were now more used to the heat than when we first came into Morocco (squinting in the sun with a Buff on my head makes me look more dodgy than usual!) 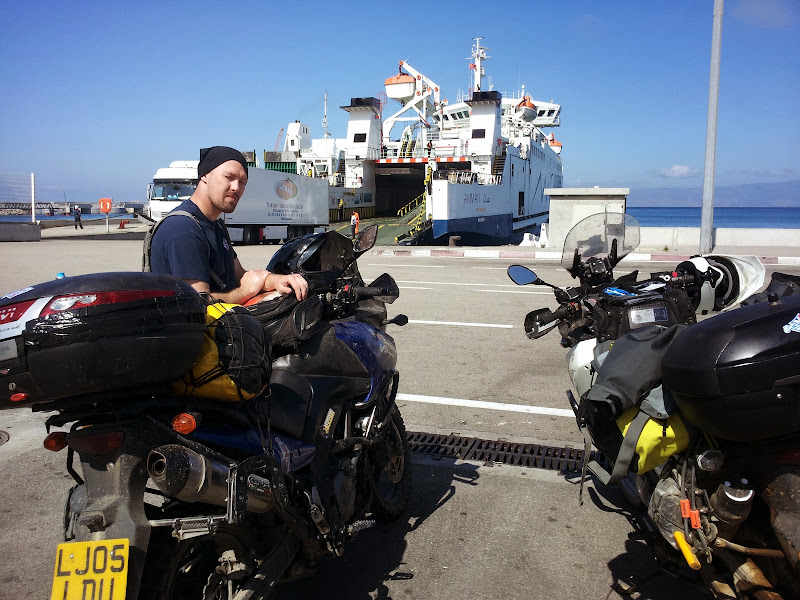 There were two blokes on GSes behind us in the queue so we struck up a conversation for a while. I noticed that one of their bikes had a number plate hanging by a single bolt. In true adventure style the GS blokes weren't prepared for this serious technical problem, only having their roadside assistance cards with them. Luckily Locky was there to save the day, out came some spare bolts and tools and it was fixed in a jiffy. 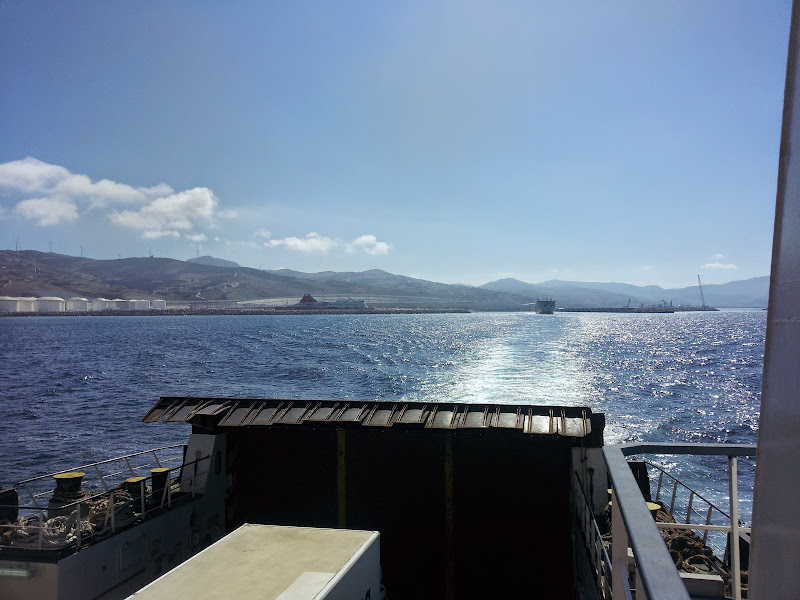 We crossed over to Malaga, but on the way back up we were going up the west side of the country rather than the way we came. This took us on some really great twisty mountain roads and it was a joy to ride even with twisted forks and being sore. The weather was hot and dry and it made for some great riding, up over the hills/mountains the temperature was cooler, but still quite warm.

We stopped at a few places for a rest, this was one of the views: 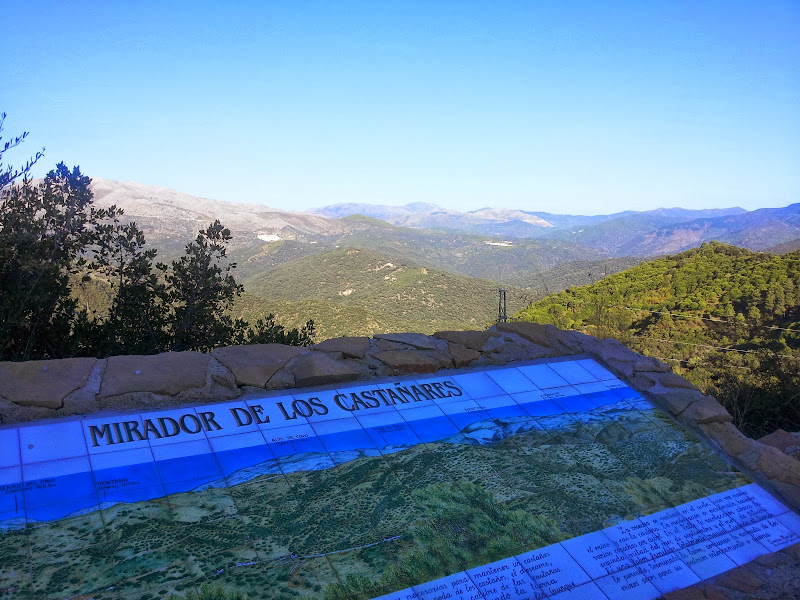 We managed to get as far as Ronda by late afternoon so decided to stay there as it was a decent sized town. We told the satnav to take us to a hotel, but it took us almost out of town and when we got there there was nothing. We went back into town and found a 3 star hotel that turned out to be the neatest place we'd slept in all of the trip and it was priced pretty well too. We can definitely recommend Hotel Molino, breakfast was also very good. 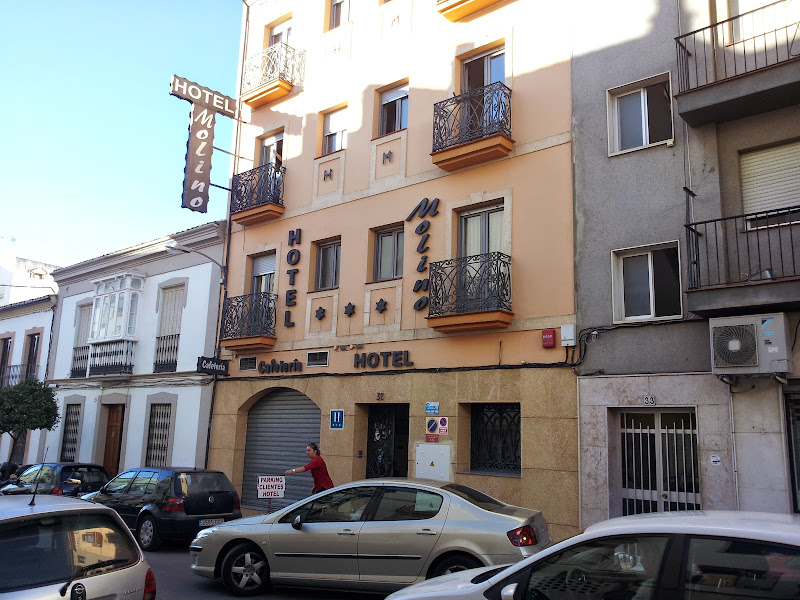 This was the view down the street in front of the hotel, very very different compared to how it would look in Morocco. 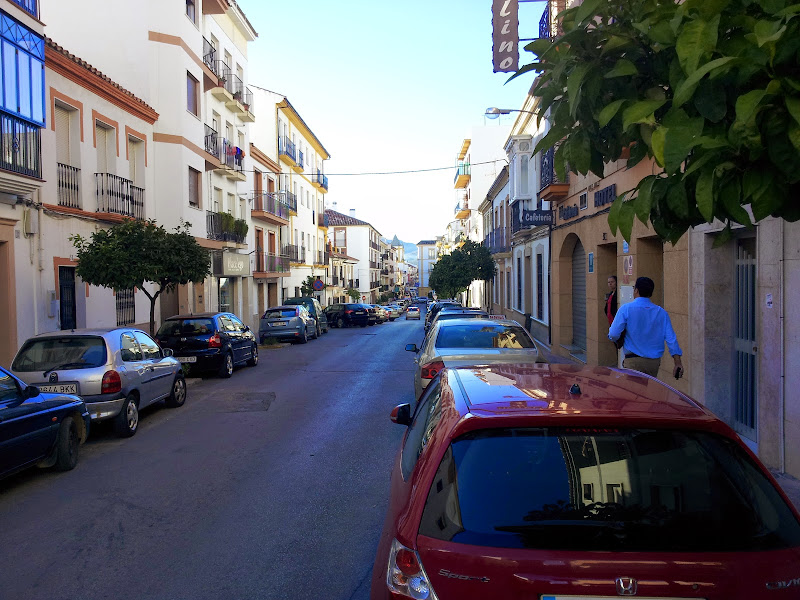 Ronda was quite a nice little town, I'd quite like to go back there and to that area for a holiday in the future. It was clean, friendly and everyone seemed to be happy and enjoy whatever they were doing in the late afternoon sun. The cobblestone roads and buildings are pretty too.

After we'd secured the bikes, unloaded them and got ourselves cleaned up we walked down town to find a place to eat. We ended up sat in an alley outside a restaurant and had a good meal and a drink or two. The cool evening air was nice and the temperature was definitely less than it would've been in Morocco, it was a good spot to relax after the day's crossing and ride. 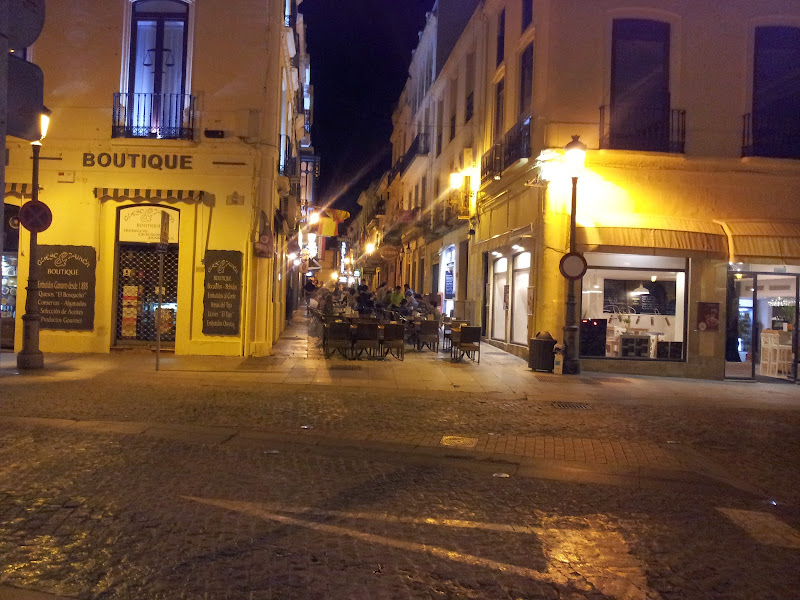 After all that there was little else to do than lowering the shutters in front of the hotel room windows and getting a good night's sleep.

Wednesday, 8 October 2014 Well, there's not much to say about Wednesday really. This was our slog day up…